Update: Late 2017 it was announced that the current Tsukiji fish market will close on October 6,2018 and will be demolished immediately after. That means the inner market, including the tuna action will move away from Tsukiji, but the outer market will stay. The new Toyosu market (Toyosu Shin Shijō 豊洲新市場, Toyosu New Market) will open on October 11, 2018. Visitors will be able to view the tuna action from behind glass on the second floor of the building.

Is the Tsukiji fish market, one of the great tourist hotspots of Tokyo, worth visiting or not? Jesse, of the YouTube-channel AnnaleeAndJesse says it’s overrated and not worth going to. Because why would you want to look at fish? That’s what he says in his vlog Tokyo Top 3 Must See & Tourist Traps. 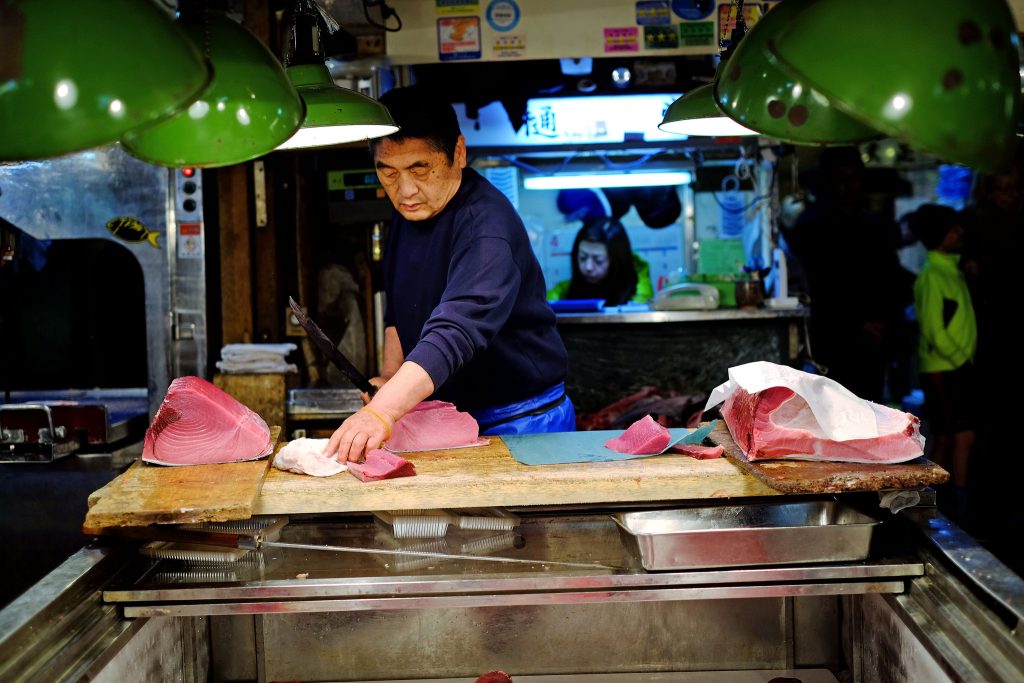 Why would you want to look at fish? Well, because it’s fun watching professionals at work, Jesse. It really is a treat. Fish is such an important part of Japanese culture. More so than the number 1 on Jesse’s list, Shibuya. Not everyone stays interested in teen fashion for their entire life. Personally, I’d rather watch fish. Bright red crabs. Slippery octopuses. It’s endlessly fascinating.

Reasons not to go to Tsukiji

That doesn’t mean I don’t understand Jesse. I sort of agree with him about Tsukiji. Yes, it smells of fish out there. And you can eat ‘fresh’ sushi anywhere in Japan. Yes, you’re in the way of the people working there. Yes, you have to get up really early. These are all reasons not to go.

The fish market in Tsukiji has an inner and an outer market. Inner is for wholesale. Outer is for everyone. Generally, guide books advertise the inner market. Those same guide books tell you to see the Tsukiji tuna auction, you’ll have to get go join the queue at 5am. That’s bad advice. Make it 3am to actually have a chance to get in. The auction starts around 5.30am, and only 120 people can go in, in two groups of 60. First come, first serve. Due to the growing number of tourists in Tokyo, come at 5am, you’re out of luck. That’s my experience.

My visit to Tsukiji

I’ve been to the fish market twice. The first time I arrived at Narita airport around 9.30 in the morning. I booked a hotel near the market and stayed awake for most of the day. Eventually, I joined the queue at 3am and was number 35 in line. In front of me was a group of drunk Canadian frat boys. Behind me, the queue grew every minute.

After a while we were allowed into a waiting room and were given coloured vests to wear. After waiting for two hours, sitting on the cold floor, cheeks red with embarrassment due to the trouble the Canadian gaijin were causing, we were herded into the building.

We were told to stay inside the visitor passage and were given 15 minutes to take picture and watch the auction. Staff wasn’t very friendly, but taking into account the frat boys, I was mildly sympathetic. During the auction they were all standing in front of me. Before I knew it, it was over. I was tired and pissed off.

Pro-tip: skip the auction. You’ll get a better idea from watching the thing on YouTube. Like here: Abroad in Japan’s Tokyo’s Freshest Sushi – Tsukiji Fishmarket. 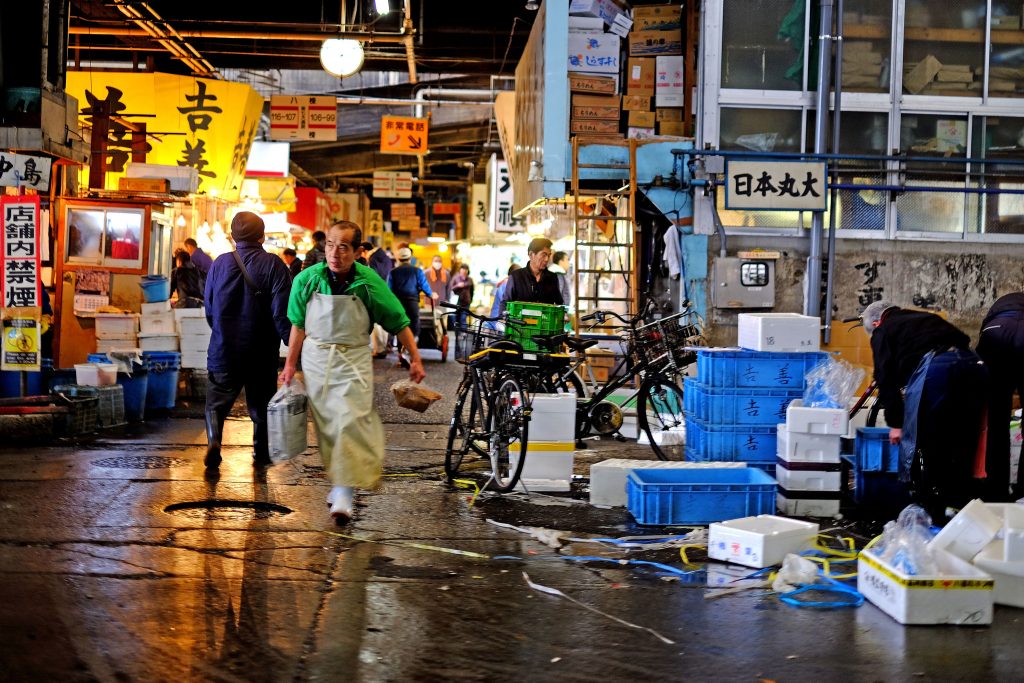 For my second visit to Tsukiji I skipped the auction. At 10am, the inner market opens for the general public. There’s more queueing and herding involved and you are supervised by staff. That’s not a bad idea, because there are people working there ride mini-fork lifts. (Watch a video.) If you are not careful, they’ll hit you. But you’re allowed to stroll through the many stands and watch the fish mongers closing up their businesses. With a bit of luck you’ll catch some of them filleting tuna with their impressive knives.

It is the outer market that’s really worth a visit. Here’s where you can buy and taste stuff as an ordinary customer. In the outer market you will find shops and restaurants selling grilled scallops, for example. Other stuff, like wasabi roots and kitchen appliances like knives.

The market is supposed to be moving. It should have been done already, but there are all kinds of problems with the new area. For now the move is planned for winter 2017/2018. It is unclear whether the new market will be accessible for tourists. The outer market, however, will stay at its current location in Tsukiji.

See my pictures of Tsukiji

NB. For those of you who watched Jesse’s vlog mentioned at the top of this article, I agree with him that Akihabara isn’t that exciting. For action figures and other merchandising such as unopened Star Wars merch from the 80s and 90s, go to Nakano Broadway.