A visit to Enoura Observatory in Odawara was the unexpected highlight of my sixth trip to Japan. Enoura Observatory lies at the foot of the Hakone mountains and looks out over Sagami bay with panoramic views of the Boso peninsula and Oshima island. It is an art gallery, an installation, an exercise in architecture, a place to perform, an open air museum, a citrus orchard, a bamboo grove and a garden. The structures and connecting corridors are placed to catch and reflect sunlight  on the days of the solstice and equinox. Not unlike the prehistoric tombs of Newgrange in Ireland, where on the day of the midwinter solstice the sun illuminates the floor of its main chamber.

The creator of Enoura Observatory is Hiroshi Sugimoto. A famous photographer who also makes sculptures, installations and has been working as an architect. You may not be familiar with his name, but you might have seen his work. Sugimoto shot the picture named “Boden Sea” that was on the cover of the album No Line On The Horizon by U2.

In 2009, Sugimoto started the Odawara Art Foundation, its aim to promote Japanese culture to a wider audience. For years he searched for a place on the coast to realise his dream. With a 2014 grant he was able to build his multidisciplinary complex on a hilly piece of land in Enoura, in the Kataura area of Odawara, some 60 miles West of Tokyo. The project opened to the public in 2017. It has a 15th century entry gate, a gallery, a tea house, a stone stage, a glass stage.The buildings and installations are largely made from found objects and material from Sugimoto’s own collection:

“It is a combination of all my training and experience gathered here — everything,” the Japanese artist says. “(It brings together) my photography experience and the landscape design. (Plus there’s) the conceptual side: the sense of my time and personal history, and human history. Then maybe the history of the universe.”

Enoura Observatory is a place of peace, quiet and serenity and the proprietors want to keep it that way. The whole complex is 38,000 m2, 10,000 of which has been cultivated. There are only two three-hour admission times per day, people are let in in small groups only. This way it’s ensured that each guest has enough personal space and time to enjoy the area. According to calculations, every visitor has about 600 m2 of personal space during his or her visit. I can attest that it is possible not to see most of the other guests in your time slot, especially since the addition of the bamboo grove in 2018. 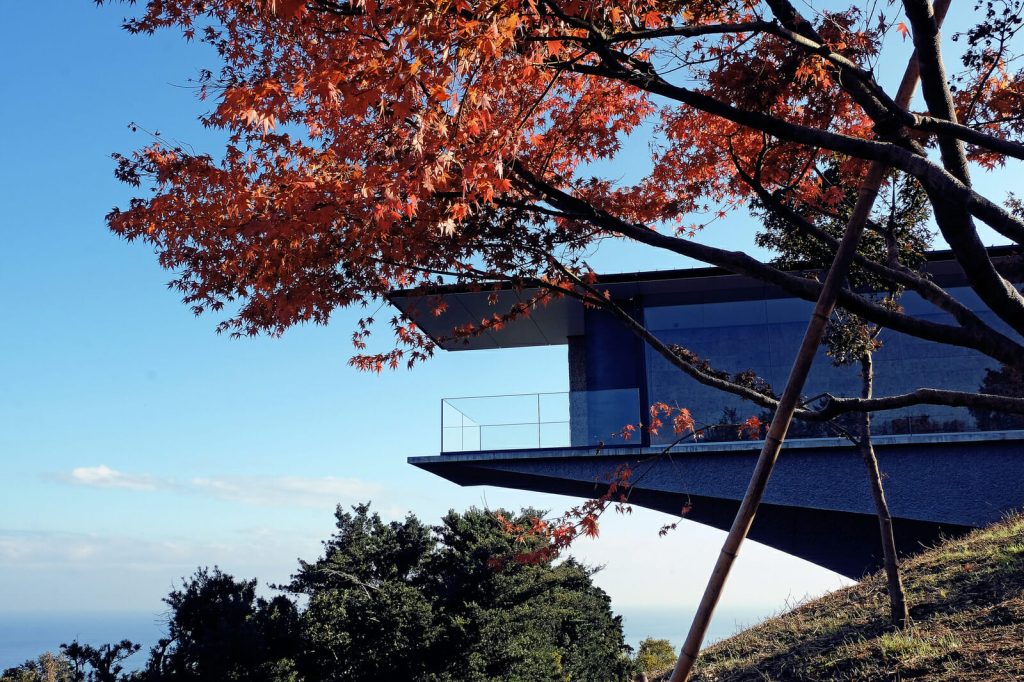 Your visit to Enoura

There are several ways to get to Enoura. I took a train to Nebukawa station on the JR Tokaido line. When you buy your ticket for one of the two admission times, you can also book a ride on the shuttle bus from Nebukawa station to the Observatory.

On arrival you are given a guide book which lists the origin of many of the objects you’ll see, and a list of rules. You can’t touch anything, you can’t use tripods and you’re not allowed to make phone calls. There’s no shop, no restaurant. There is a vending machine and designated locations in which the eating and drinking is allowed. Everything is geared towards the optimal experience of art and nature. Silence is king. You have the mountains behind y0u, the sea ahead of you. The deep orange colour of a rusty platform contrasts with the clear blue sky. Light plays an important part throughout the observatory. Sugimoto is after all a photographer. Light shines through the cracks, through holes in the walls of dark corridors, it reflects in the many glass objects and surfaces. There is so much to take in at Enoura Observatory that the three hours you are allowed in pass very quickly. Eventually, you’ll find all the people in your group will gather at the stone theatre and glass stage overlooking the bay, somehow drawn to it or each other. You wait for the gong to be struck, signalling the end of your visit to Enoura. The shuttle bus will take you back to the station.

Plan your visit to Enoura Observatory

Visiting Enoura Observatory is by appointment only. Visiting hours change season by season, check the Odawara Art Foundation website for the most recent information. You can book your time slot on the same website, from three months in advance.

The closest train stations are  JR Tokaido Line Nebukawa Station en Manazuru Station. There is a free shuttle bus from Nebukawa and there are taxis from Manazura.