Since my last trip, the “best ramen in Japan” is the Mukashi bowl at Kurume Taiho. Near the Tenjin station in Fukuoka, I ate the most impressive bowl of soup in my life.

I can’t say I am an connaisseur, not yet. But I really like ramen. It took a while. I’m not that keen on soup, so the first few times I went to Japan, I didn’t even try. What could be so special about a bowl of soup, I thought. That changed when I landed in ramen restaurant in Kyoto by accident. We were tired and hungry and we couldn’t find anything else, or couldn’t make up our minds. I don’t think Kyoto is known for its ramen, but that first experience with a bowl of ‘chasumen’ (with extra slices of pork) was good enough to convert me. Unfortunately the meal didn’t sit well with my travel buddy, unused to eating pork. But it was instant addiction for me. What a heart warming meal that was.

My favourite type of ramen is tonkotsu shio. Not shoyu, not miso, just shio. The taste of salt. Preferably with a broth so thick it’s almost liquid pork. Pork is my favourite type of meat anyway. I wrote about tonkatsu, the Japanese schnitzel here before. Contrary to Japanese custom, I am totally willing to leave part of the noodles and just feast on the broth. Japanese people do it the other way around. They’ll leave part of the broth because the fatty, salty soup isn’t that healthy for you. But I just can’t leave it like that.

Through watching a video by vloggers Simon and Martina, I learnt that tonkotsu ramen is originally from the town of Kurume. ( I choose to believe their story, I didn’t verify it.) They filmed their experience at Kurume Ramen Seiyokeno. Kurume is close to Fukuoka, down in the West of Japan. I’ve been to Fukuoka twice, but didn’t have time to go down to Kurume. But I found out there are branches of Kurume based shops in Fukuoka itself. That’s how I ended up at Kurume Taiho, near Tenjin station (Google Maps), and that’s where I ate what I consider to be MY “Best Ramen in Japan”.

My Best Ramen in JapanTM  is an “acquired taste”. Not everybody is going to appreciate it. Kurume Taiho ramen isn’t just a pretty fatty bowl of food, it also happens to be a rather funky soup. I’m sure that’s partly because of their use of literally all the parts of the pig, nose to tail. But later in the day I noticed that drops of the soup that had fallen on my jacket smelled of rotten fish.

That rotten fish smell was very familiar to me as a Dutch/Indonesian. Maybe you know it too, the “terasi”, fermented shrimp paste, that’s used in very small quantities in Indonesian cuisine. I suspect Kurume Taiho to be using something similar in their ‘tare’. Tare is the seasoning that determines the flavour of the ramen: salty, sweet, sour, spicy and/or umami. The tare can contain anything apart from shoyu or miso. Mirin, dashi, vinegar, sake, garlic, etc. And at Taiho, it’s pretty strongly flavoured. So strong, that maybe it’s a good idea NOT to smell your soup before you eat it.

Rinds in the ramen

Less scary than fermented fish for the average tourist and probably easier to recognise, are the yummy bits of pork rind that Taiho puts in their bowls of Mukashi ramen. I hadn’t seen that before. In the picture below you can see the rinds floating on the right hand side. You also see the menma (fermented bamboo shoots). Some nori, spring onions and a soft boiled egg to top it off.

So now I have a problem. I want to go back to Fukuoka. For the soup. And it’s going to happen: in April 2018 I will travel via South-Korea’s Busan to Fukuoka by ferry. A pit stop at Taiho’s is on the itinerary. 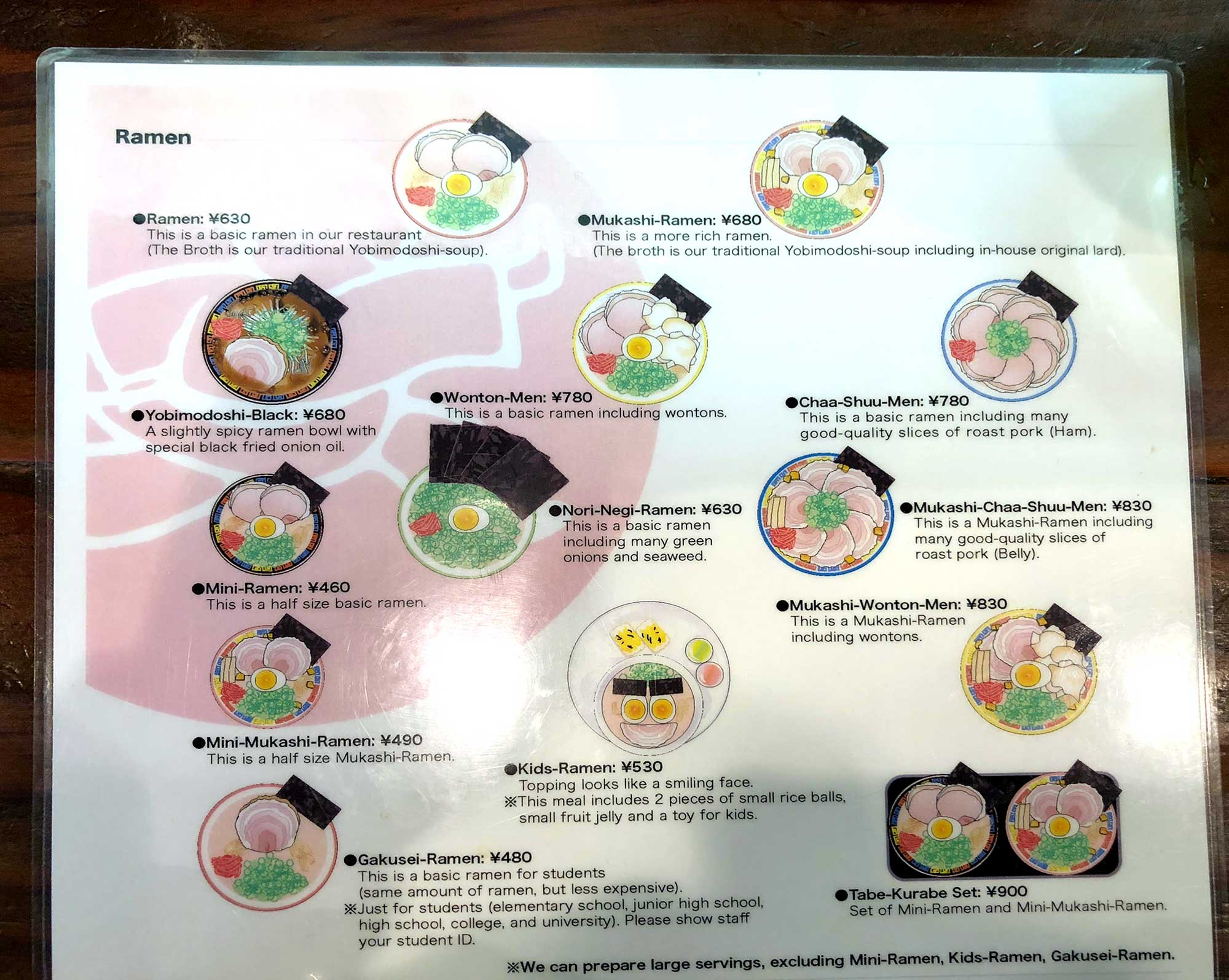 This is the Kurume Taiho website. If you’re not planning to go to Fukuoka, I was at a place in Osaka that was very good: Zundouya near Shinsaibashi. Less ‘funky’, but very tasty. Zundouya has shops all over Japan. I like it more than the better known Ichiran and Ippudo.

Ramen in the Netherlands

These are my top 3 favourite ramen shops in Amsterdam:

What is your favourite ramen?