Going to a baseball game in Japan had been at the top of my bucket list for a while. Baseball is Japan’s most popular sport. Not sumo, not judo, but baseball. They’ve been playing it since 1872. The professional branch in Japan is called “Nippon Professional Baseball”. There are two leagues, with six teams each. Many Japanese players join the Major League in America, so the sport is played at a high level.

I wrote about Yokohama and its baseball stadium before. I’d walked past the stadium a few times, and sometimes there was a game on. I’d gone to a tourist information centre in Tokyo to try and buy a ticket for a game. “Sold out”, they said, but I got the impression they thought it would be too complicated to help me since none of the staff spoke English and my Japanese wasn’t good enough to change their minds. I’d also tried to buy tickets from the somewhat old fashioned looking japanballtickets.com website. I thought their handling fees were a bit steep and their navigation and site design a little complicated.

Looking for tickets to a baseball game in Japan

Just before my departure in April 2018 I saw that the Asia-specialised booking platform Voyagin were selling  Japanese baseball tickets starting from the reasonable price of about 30 euros (ticket + handling fees) to about 100 euros. I had succesfully used their platform before to make a reservation at a sushi restaurant, so I felt confident they would be able to arrange baseball tickets as well.

The baseball season in Japan is 8 months long, starting in April. A game lasts about three hours. Do not postpone buying tickets for too long, popular games sell out quickly.

Booking tickets to a baseball game

Booking baseball game tickets was easy. After I’d put in my request I was contacted by Voyagin staff. The supporters stand of the home playing Yokohama BayStars was sold out, was I willing to switch to the general admission stand?  No problem. I very quickly received confirmation and instructions on how to pick up my ticket. And I got some money back, since the general admission stand was cheaper than my first choice. With my booking code I was able to go to any 7-11  ‘konbini’ store, where my ticket was printed for me. By the way, it turns out you can buy your baseball and other event tickets from 7-eleven without pre-booking. 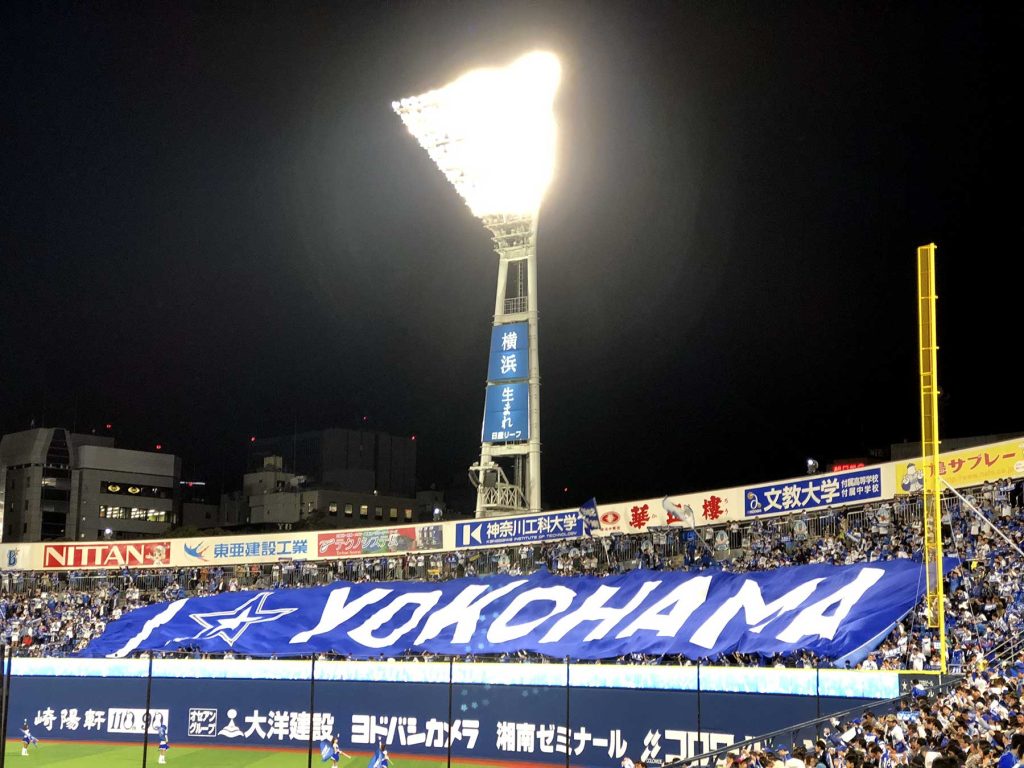 The baseball game in Yokohama

In 2018, on my birthday, at long last I was at a game between the Yokohama DeNa BayStars vs Yomiuri Giants. My seat was on the right side of the pitch, parallel to the pitcher’s plate. It was fantastic. Long before the match started, it was lively around the stadium. Outside the stadium there were many stands selling food and merchandising. 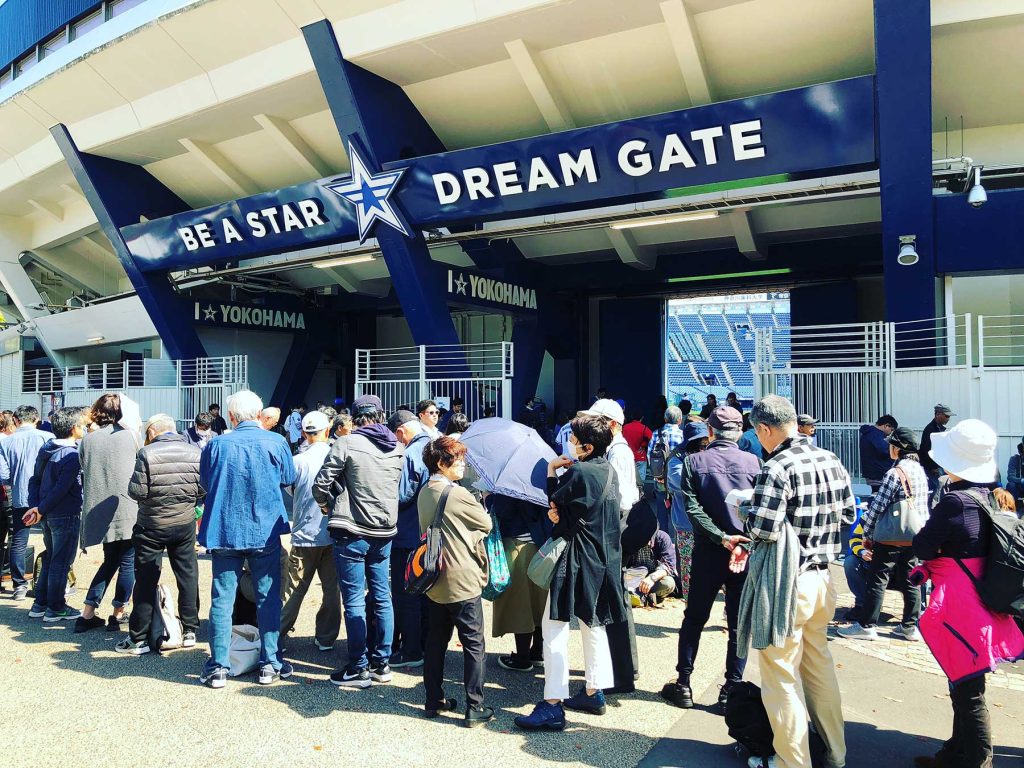 Fans were queuing up at the ‘Dream Gate’, a special gate where they were going to meet the players after their warm up. All Japanese teams have their own mascotte. The Baystars character is a chipmunk-like animal called DB Starman. You can buy him in all shapes and sizes, before, during and after the matches. There’s a shop in the stadium as well, it’s open even when there’s no game on. Inside the stadium there was a lot more food. Things you expect at a baseball game, like popcorn and hamburgers. But Japanese food as well. Once seated, there’s a lot of entertainment on and off the pitch. Cheerleaders and a life size DB Starman. Between innings there was plenty of entertainment too.

The fans are super organised. Many of them were wearing team colours. The stadium was sold out and during the match people were singing, letting go of balloons – all synchronised – and waving banners. Every player has his own song that people would sing when they were up for batting. Eventually, the home team, Yokohama DeNa Baystars won 5-0 and that made for an incredible atmosphere.

Book tickets for a baseball game in Japan

This button leads to the Voyagin.com booking site.